Much like dogs, cats come in many different breeds. Their sizes range from surprisingly large to the very small.

The Savannah cat has been recognised as the world’s largest domestic breed. It is a mixture of standard felines and an African wildcat called a Serval. Savannah cats have been known to reach up to 30 lb. However, their individual sizes can vary considerably. The RSPCA has stated that Savannahs living in the UK could have a negative impact on local wildlife.

One of the most famous of all cat breeds, the Maine Coon is renowned for its largeness. Females tend to weigh between 10 and 15 lb, while males have been known to reach 25 lb. These felines are popular not just for their size but also their friendly and easy-going nature. 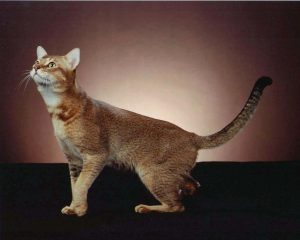 UK residents will have difficulty finding a Chausie as they are exceptionally rare. Despite this, the breed is highly sought after thanks to its size (a maximum of 22lb) and domesticity. They have inherited their striking appearance from jungle cats.

This is the smallest cat type in the world. They are generally half as small as standard domestic ones. The breed appeared at the Cat Fanciers show in 2017 and continues to receive attention from feline fans. 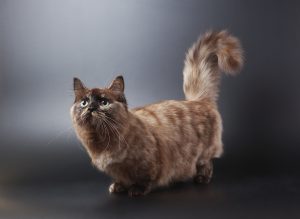 Due to a genetic mutation, the Munchkin cat has strikingly short legs. The breed first emerged in the 1980s, making it a fairly modern cat type. Despite their legs, they are very playful and can run just as fast as normal cats. However, they are very poor jumpers.

The Cornish Rex is so petite that it is sometimes mistaken for a kitten. They have soft and wavy coats, as well as Siamese cat style ears. This breed is known for its intelligence and willingness to bond.